If everything goes as planned, I will be one of several thousand students receiving diplomas from the University of Tennessee at Knoxville this spring.  Like the other graduates, I will be handed a piece of paper representing several years of hard work. But my journey to reach my degree started differently than that of the other graduates.
It started in Vietnam, where the equatorial sun hangs heavy and unmoving in the sky year-round.  Where the tropical heat suffocates strangers but the sun-beaten peasants toil endless hours, scratching out a living from the soil beneath their feet.

Like our rural neighbors, my family worked the ground as well.  We were farmers of every kind of produce in the unremarkable village of Bien Hoa, just north of the capital, Ho Chi Minh City.  At the time, I was too young to work the fields.  I couldn’t walk yet, but my sisters, about three and four years older, were already helping my parents with the crops.  They harvested what the land brought forth and what kept malnutrition at bay.
But then our mother unexpectedly died from a lightning strike. Our father mourned the loss of his wife and the loss of the extra pair of working hands. The farm began to fail and our household fell apart. Without my mother’s smiling face, our roadside shack was no longer a home.  My sisters took over my care while my father struggled to find a new way of living.

For a while, our father sent us to live on our grandparents’ farm.  But their household was already full and there was little room for three more children.  Our next stop was a nearby orphanage. This foreign place with whitewashed walls became our home.  The orphanage was operated by Catholic nuns who schooled us in their religion as they provided a basic education.  The facility was primitive – a pocket of wildness in this era of civilization. 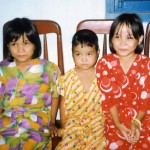 Flanked by my sisters, Kelsey and Haley

The toilets didn’t work and the older children were expected to help the nuns with looking after the smaller children.  My oldest sister has the worst memories of having to wash the cloth diapers used and reused by the babies.  The cloth diapers, along with the rest of our laundry, was dried on clothes lines in the courtyard.  We ran barefoot underneath them to the cafeteria, where a stockpot sat with whatever the nuns could cook during the babies’ nap time.

But most of my memories from this chapter of my life are lost to space and time.  I was about five and my sisters were seven and eight by the time we were adopted, according to the official documents from the orphanage.  Older children were next to impossible to adopt away, and for someone to adopt three or more siblings together was unheard of, but we suspect that the nuns’ wish for a better life for their wayward children led them to lie about our ages.  By Vietnamese standards, we were normal size, but an American family looking at us would see puny children who could pass for much younger than their birth mother would proclaim.

Though my memories from this time are few, there are some bright splashes of color that seemingly have no significance but are more vivid to me than the faces of my biological parents. I can remember our father coming to visit us regularly at the orphanage.  With his motorbike, he would take us out to eat on the streets, which in Vietnam is a cornucopia of food vendors, their offerings ranging from wild game like monkey to the traditional Pho noodle soup. As the youngest of the sisters and the puniest, I always sat on my father’s lap with the gas gauge underneath while my sisters clung to our father’s back, our raven hair waving in the wind. Those visits were the only times I’ve ever been on a motorcycle.

But for me, the most vibrant memory of that time was running to meet the lady with the smiling round face who weekly came to sell delicious noodles, a treat for the kids at the orphanage.  We ate the noodles like American children would eat candy.

Our father’s second wedding, with his new wife, also remains with me.  The new woman was well-off by the standards for our small Vietnamese village, which meant our father was no longer playing a game of Pick-Up Sticks with poverty.  They married while we were at the orphanage.  My sisters and I were invited to the wedding, and although most of the traditional, ceremonial things happened, I only remember a white frou-frou dress that cocooned my body into a walking, talking cotton ball – until it met its demise when a traditional red dipping sauce was spilt down the front.

I do not recall much else.  The task of remembering is like looking at a photograph from the 1800s, faded and yellow with no smiles on anyone’s faces.

My sisters and I were growing up, a joyous process for most children, but it meant it would be more difficult for the three of us to be adopted together.  But Tim and Pam Greer from Soddy-Daisy, Tennessee, a 30-minute drive outside of Chattanooga, decided to adopt all of us. It was an expensive and time-consuming process. 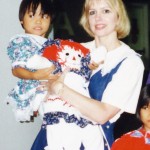 With my new mom and my new doll

But finally, September 6, 1994, we arrived in America, now our home.  Our new mother, clever with her hands, had made each of us a doll to commemorate the event.  Our parents drove to the airport with three inert dolls buckled into their newly purchased mini-van.  They came home with three animated girls, no bigger than their doll toys.

It was that simple.  Our father had found himself a new wife and family to belong to, and so had my sisters and I.

From this moment, my life truly began.  I’ve been blessed with the opportunity to be raised in America with all of its chances to grow as an individual, chances that Vietnam could not offer.  The Chattanooga airport was our Ellis Island – it held the hope and promise of a better life.

America gave me a chance to complete my education, a chance to choose a career outside of the home, a chance to not live day-by-day scratching out a meager existence. Instead, I’m receiving my Bachelor’s of Science in Communication for journalism and electronic media from The University of Tennessee May 2010.  I could never be where I am today without the courage of my adoptive parents to save my sisters and me from the empty life we would have lived in Vietnam.

My opportunities have opened my eyes and heart, and I have made it my life’s ambition to return the favor that adoption has given me to the rest of the world.
I believe correct information can empower people and ignorance is the strongest weapon the enemy has against us.  In this manner, I hope that my career as a journalist, and whatever else my future might hold, can educate and improve the lives of as many people as possible. 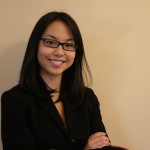 As an international journalist, I could reach out to more people.  My dream is not of fame or riches but of leaving a lasting impression upon the world that not all hope is lost.  This is my aspiration, but I have many miles to go before I sleep.

Somewhere inside all of us lives our younger and better self.  As I graduate college and begin searching for the next chapter of my life, I feel more like the scared little girl that I started out as, unsure about what is in store. It is in these moments that I remember my heritage and my unique story.  Although my doll, carefully sewn with love and embroidered with my name and anniversary of coming to America, might not have been my favorite plaything growing up, today I cherish its significance.