September 29, 2011
Wildlife photographer Jim Bennett and I traveled to Cataloochee, a remote valley on the North Carolina side of the Great Smoky Mountains National Park. Our object was not so much to commune with nature as to be voyeurs. There is an elk herd in Cataloochee and this is rutting season, when the bulls gather in the meadows to claim their cows and then mate with them.
The viewing spots are limited – much of the area surrounding the meadows is forested and, until they head out of the woods in late afternoon, dangerously occupied by large, horned animals in rut. So we chose a weekday, when there would be fewer two-legged, camera-armed animals jostling for sightlines.
The bulls are heard before they are seen, bellowing periodically from the woods to announce their presence to the cows and other bulls. The sound – usually compared to a bugle call – is surprisingly high-pitched. Jim described it as the sound an 800-pound mouse might make.
The elk, acclimated though they are to the valley’s tourists, keep to their own schedule, and we realized that we had arrived early. So we shot pictures of wild turkeys until the thickening road dust kicked up by vehicles indicated more arrivals. 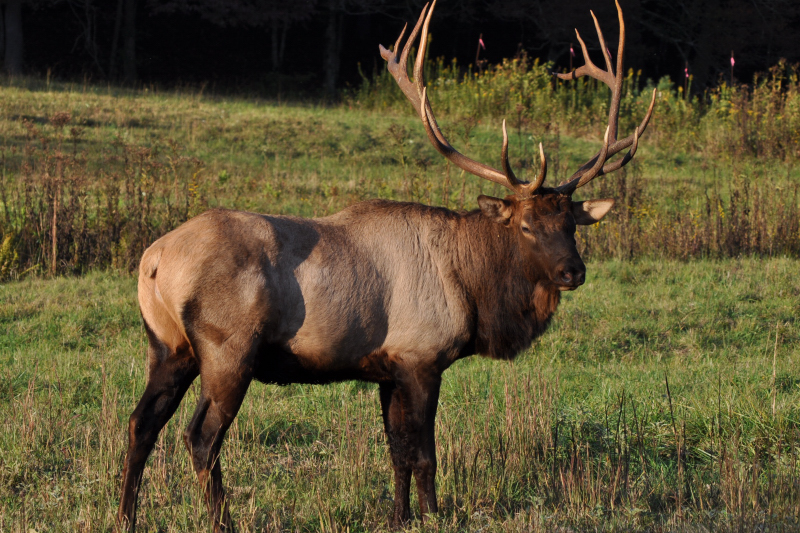 Lord of his realm — Photo by Jim Bennett

We claimed a spot at the end of one meadow, set up chairs, got out sandwiches and listened. After a few minutes a bull obliged, bugling from the woods. But he didn’t draw any cows – just more watchers. Soon, the side of the field was thick with picnickers sitting in folding chairs, cameras at the ready.
Finally, the bull nonchalantly walked out of the trees as if he had been waiting for the theater to fill before making his entrance. He was adorned by a magnificent rack – obviously a veteran of many ruts. He skirted the edge of the field, headed in the direction where we had seen cows grazing earlier. But at the far end, where trees lined a small stream, he paused, acting as if he was more interested in grazing than sex. Then he headed back the way he had come, staying in the shadows and making photography difficult.
We decided to go down to the next field, in the direction of the cows. There we saw the reason for his hesitation – another big-horned bull had claimed the females. We joined the audience there, Jim finding space for his telephoto-equipped camera. Soon the small area was crowded, dominated by one naturalist and his heavy, tripod-mounted professional-looking video outfit.
The bull took no notice. He kept trying to climb aboard the cows – without success. Coy, they moved out of reach whenever he got too close. Occasionally he would manage to briefly mount before they slipped away.
The audience found this amusing, uttering appropriate comments along the lines of “not now, I’ve got a headache”.
Periodically, a young bull would slip out of the woods and move toward the cows. But the old master would have none of that, chasing him back to cover.
The audience, frustrated by the lack of action, began clamoring for the other contender to cross the stream into our bull’s territory for some horn-clanging battle. The mood was one of “If we can’t have sex, we want combat.”
I went back up to the other field to see what the holdup was. And found our other bugler lying down, apparently bored with the entire scenario. Soon, as the sun slipped behind the trees, a park ranger told us that, late as it was, there would probably not be anything else happening.
The elk, I guess, wanted that big weekend audience for their performance.